Wondering where things are for RVAsec in the VCU University Student Commons? Look no further! 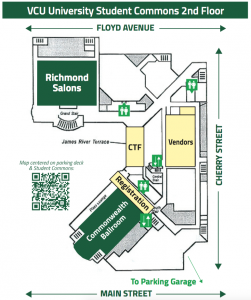 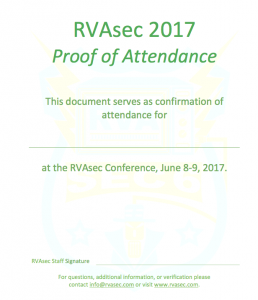 If you need proof of attendance for your certification CPEs, please use this PDF.

Network bubba, health care IT survivor, now trying to play Horatio on the bridge via infosec for customers of my new company.

Shannon Yeaker, PMP, CISA, CAHIMS is a Lead Consultant with Impact Makers in the Governance, Risk and Compliance (GRC) Practice. She is a dynamic IT professional with extensive experience in Information Security, control design, risk management, project and process management at a Fortune 200 company in the financial services industry. She is a certified Project Management Professional (PMP), a Certified Information Systems Auditor (CISA), Certified Associate in Healthcare and Information Management Systems (CAHIMS) and holds additional certifications in Business Process Management, Agile, Lean and Scrum. Shannon is a member of the Virginia Chapter of the Information Systems Audit and Control Association (ISACA).Currently serving as a Project Manager assisting a $3.5 billon healthcare system with multi-year and multi-million dollar information security transformation program. She manages the delivery of secure network segmentation to over 30,000 endpoints in 7 states.  Shannon was previously with Capital One, for more than 20 years. She has a Master’s Certificate in Project Management from George Washington University and a Bachelor of Science in Psychology from James Madison University.

Network segmentation is a great way to build a foundation for a thorough approach to defense in depth as part of your security program. The benefits can be great, but the path is not without some risk of its own. This talk with review some of the challenges and successful strategies to create a solid and sustainable practice on getting your arms around what is out there and on your network. The presenters, fresh from a large scale project to do this at a health system, will cover tips, tricks, pitfalls and the like to let you approach this very useful tool with your eyes wide open.

Come see us at RVAsec!

RVAsec is officially sold out!

We have already had emails coming in from people hoping to get tickets to RVAsec.  While we are pleased that we are sold out, unfortunately we are at capacity at this point.

If you are still interested in attending please add your name to the wait list as soon as possible.

If tickets for some reason become available then you will be notified and provided an opportunity to purchase.  You should have a day from the time you are emailed to purchase, and if you do not, then the next person of the list will be provided the opportunity, and so on it goes.

Please note that you will NOT be able to get a bag/shirt or a hackable badge if any tickets do open up.

In fact, this is a good time to remind that for anyone that registered LATE (it is noted on your ticket) are not guaranteed a bag, shirt or hackable badge.

If for some reason you are not able to attend RVAsec last minute, please note that we can’t provide refunds this late but we might be able help someone else attend (email us!).  It is however possible to transfer your ticket.

Ticket Transfers
Log in to your Eventbrite account and go to My Tickets (you may need to create an account using the email address you registered).

You can then view your Current Orders (select RVAsec), and “Edit details” for the ticket. Changing the “Contact Information” will update the name of the person registered to check in at the conference. You can also change the questions asked at registration, which will help us plan for parking, catering and other items.

Refunds
No refunds for the conference will be issued after May 10th.

Hotel
The conference hotel is almost as capacity.  They have told us that they can’t help anyone with room past May 22nd.  If you still need a room you need to contact them ASAP or you will be on your own!

As the next-generation security company, we are leading a new era in cybersecurity by safely enabling all applications and preventing advanced threats from achieving their objectives for tens of thousands of organizations around the world. We are one of the fastest growing security companies in the market because of our deep expertise, commitment to innovation, and game-changing security platform focused on bringing an end to the era of breaches by uniquely integrating our Next-Generation Firewall, Advanced Endpoint Protection, and Threat Intelligence Cloud. 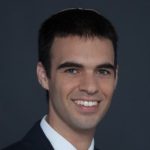 Alon Arvatz runs products at IntSights.  Prior to co-founding IntSights, Alon had was a cyber security professional in the military and private sector.  Alon started his career serving in an elite intelligence unit in the Israel Defense Forces.  Then, Alon joined Guy Nizan to establish Cyber School, a center providing teenagers with courses, seminars and summer camp workshops on cyber intelligence.  Hoping to help enterprises capitalize from his experience, he co-founded IntSights to make threat intelligence programs a reality for enterprises around the world. When not defending companies from hackers, Alon spends time with his very cute family.

Discussing real use cases of state actors engaged in APT campaigns, explore what can be done with the available intelligence tools we have today, specifically from the Dark Web.

Terry McAuliffe, Governor of Virginia To Provide Remarks At RVAsec 2017!

We are pleased to announce that Virginia Governor McAuliffe will once again be providing remarks at RVAsec 2017!

Terry McAuliffe is the 72nd Governor of Virginia. Since being sworn-into office, Governor McAuliffe has aggressively focused on building a new Virginia 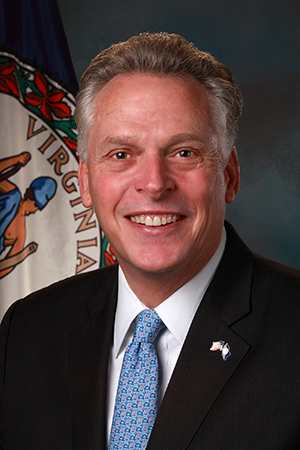 Whether traveling to Bedford or Beijing, Governor McAuliffe has made it clear that his number one priority is economic development and he is working hard to create and maintain jobs throughout the Commonwealth.

The Governor is also working to restore trust in government. On his first day in office, he signed an executive order imposing a $100 gift ban on himself, his family, and members of his administration and their families. He established through executive order the Commission on Integrity and Public Confidence in State Government, which will focus on ethics oversight and enforcement, limits on gifts and loans, rules on conflicts of interest, disclosure requirements and post-public service restrictions.

McAuliffe has proven that his administration will be smart stewards of Virginia’s transportation dollars. Demonstrating his commitment to bipartisanship, he worked with Republican leadership on House Bill 2 to prioritize transportation projects based on what is best for Virginia’s commuters not politicians.  He followed through on his commitment to lowering the downtown/midtown tunnel tolls to alleviate the burden on Hampton Roads residents, commuters, and businesses. He eliminated the EZ Pass maintenance fee for all Virginia commuters, and suspended work on Route 460, because he does not believe that Virginia taxpayers should be spending hundreds of millions of dollars on a road when we don’t have permits to ensure its completion. Governor McAuliffe also worked with the Governor of Maryland and the Mayor of the District of Columbia to invest $75 million in our regional metro system – taking cars off the roads and relieving congestion.

Governor McAuliffe understands that in order to compete for the jobs of tomorrow, it is essential that we make key investments today. The Governor signed legislation increasing the amount of Virginia qualified research and development expenses that can now be claimed as a tax credit. This legislation is important because it encourages private companies to invest in the jobs of the future.

In order to ensure that Virginia continues to have the best workers in the world, Governor McAuliffe understands that Virginia must continue to have a world-class education system. This year, he was proud to sign standards of learning reform legislation, to make Virginia’s education system work better for students, teachers, and our schools.

Virginia is home to approximately 800,000 veterans, and the Governor is committed to fighting for those who have so bravely served our country. He expanded the Virginia Values Veterans initiative, which encourages employers to recruit, hire, train, and retrain our veterans. He also signed legislation to provide unemployment compensation to military spouses who leave their job to accompany their spouse to a new military assignment in another state, as well as legislation that will expand access to higher education for eligible veterans’ family members.

In July 2014, Governor McAuliffe signed Executive Order 23 Establishing the New Virginia Economy Workforce Initiative.  With a goal of an additional 50,000 credentials, aligning the workforce supply with demand and giving experience credit to our veterans, Governor McAuliffe wants to redesign our current workforce system to work with the needs of our communities and businesses.

The Governor’s administration has made unprecedented progress on the restoration of rights to rehabilitated felons who have served their time. People who have paid their debt to society should be able to work, pay taxes and vote.

Governor McAuliffe ran for office to fight for uninsured Virginians and that is why he took bold executive action to expand health care. His plan, A Healthy Virginia, will help improve the lives of more than 200,000 Virginians by expanding access to care, improving care for veterans and for those with severe mental illness, and enhancing value and innovation across our health system.

Governor McAuliffe previously served as Chairman of the Democratic National Committee from 2001 to 2005, was co-chairman of President Bill Clinton’s 1996 re-election campaign, and was chairman of Hillary Clinton’s 2008 presidential campaign.

He and his wife Dorothy were married in 1988 and have five children.

Qualys, Inc. (NASDAQ: QLYS) is a pioneer and leading provider of cloud-based security and compliance solutions with over 9,300 customers in more than 100 countries, including a majority of each of the Forbes Global 100 and Fortune 100. The Qualys Cloud Platform and integrated suite of solutions help organizations simplify security operations and lower the cost of compliance by delivering critical security intelligence on demand and automating the full spectrum of auditing, compliance and protection for IT systems and web applications. Founded in 1999, Qualys has established strategic partnerships with leading managed service providers and consulting organizations including Accenture, BT, Cognizant Technology Solutions, Deutsche Telekom, Fujitsu, HCL Technologies, HP Enterprise, IBM, Infosys, NTT, Optiv, SecureWorks, Tata Communications, Verizon and Wipro. The company is also a founding member of the Cloud Security Alliance (CSA).